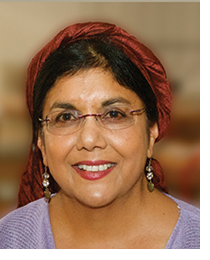 I did not choose journalism. Journalism chose me. When my dad suggested that I consider studying journalism, it did not resonate with me. I had never met a journalist in my young life and I imagined that I would not be clever enough to be one. What an absurd thought when I look back now. Remember then I was a young woman who had lived most of her life under apartheid and had known mainly the local Muslim and mixed community where I grew up.

This mixed community was labeled Coloured under Apartheid. I ended up going to UCT after getting special permission from the Coloured Affairs Department to attend a white university and found myself drawn towards clinical psychology. At the end of my second year, I applied for holiday jobs by writing letters to seven companies in the Cape. Only one company replied and that was the Argus Company.

I was called in for an interview and offered a job for one month in December 1976. When I arrived at the Argus on 1 December, I had no idea that I would be expected to be a reporter.

I thought I would just run around for the editor. My family thought it was a big joke that I was going off to a job and not knowing what the job was. I did not care. I was just happy that it was a job.

It was only when the news editor asked me to take a call and help take down the details of a caller who was organizing a camp for under-privileged white children from Woodstock, I realized that I would be expected to report. I was hooked. Rhodes was the only university offering journalism studies at the time so I travelled to the Eastern Cape during my vacation the following year. I was disappointed to learn that I would have to complete another degree and decided not to do this.

But then the head of the Journalism Department at Rhodes, Professor Tony Giffard contacted me and said he had applied for special permission for me to do the degree over two years. At the end of 1979, at 21 years of age, I had completed both degrees – one at UCT and one at Rhodes. By the time I was 22 years old, I started my professional life at the Rand Daily Mail in Johannesburg and then went on to Cape Town to join the Cape Times. There was no turning back then. Years later after our first democratic election in 1994, I allowed myself the luxury of doing a masters degree at Columbia University in New York. I was away in 1995-96 and when I got back we were in the throes of facing all the difficulties of reconstructing our country.

Zubeida Jaffer is an award-winning South African journalist and author. She is presently based at the University of the Free State as Writer-in-Residence in the Department of Communication Sciences.

She started her career at the Cape Times in 1980 and also spent a short stint at the Rand Daily Mail in Johannesburg in the same year. Her work has earned her numerous local and international awards. These include the Muslim Views Achiever Award as well as the Honor Medal for Distinguished Service to Journalism from the University of Missouri in the USA.

Her memoir, Our Generation, eloquently tells the story of her emotional journey through the years of South Africa’s turbulence into a new democracy. It has been translated into Arabic. Her second book, Love in the Time of Treason has been described as a “tour de force” and is published internationally under the title, On Trial with Mandela.

Beauty of the Heart, The life and times of Charlotte Mannya Maxeke, is her third book, published in mid-2016.

Ms Jaffer is a graduate of both the University of Cape Town and Rhodes University in the Eastern Cape. She also holds a masters degree from Columbia University in New York. She is the publisher of The Journalist (www.thejournalist.org.za), a multimedia website designed to tell the stories of forgotten pioneers of journalism in her country and on the continent.

She lives in Wynberg, Cape Town where her family has resided for close to 60 years.